All the Little Eagles that breed in the Canberra area are now back in their breeding territories after their winter away. A sample of six of these were fitted with GPS-tracking devices and their movements followed during this past winter. They followed similar routes and over-wintering areas as those described in the previous post below, in the second annual report. It will take time to fully analyse all these birds' movements, so for now, here is an example of one bird's movements during the non-breeding period. 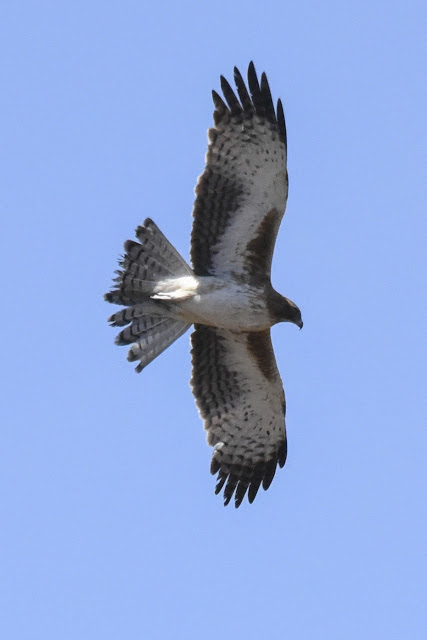 An adult female Little Eagle, Y2,
flying over her territory 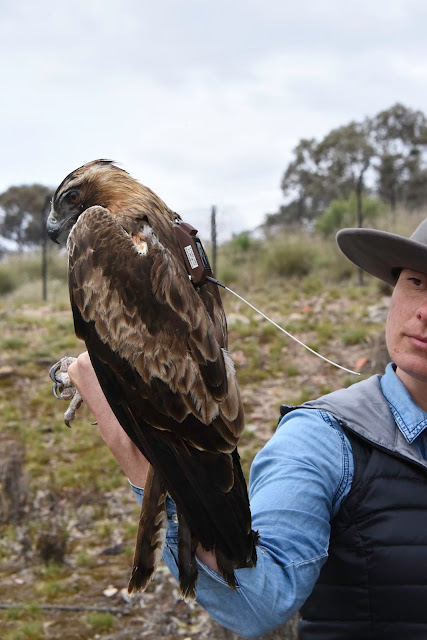 The same bird in the hand after being fitted with a GPS-tracker and individually coded bands, Y2. 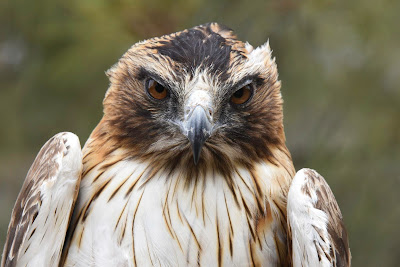 And a photograph of her face while in the hand. The plumage colouring is highly variable between birds, which helps individual identification.

This annotated map shows the route of this bird's return migration to Cape York in northern Australia. The large dots are locations where she spent an overnight stop. She left Canberra on 14 March 2020 and arrived at her over-wintering area on 24 March, a journey of ten days. She spent four and a half months in a well-defined area of tropical savannah. Then she set off on her return flight on 17 August, reaching Canberra on the 31st, after a slightly longer journey of 14 days. She is now back in the same territory she occupied in 2019.

3 comments:
Email ThisBlogThis!Share to TwitterShare to FacebookShare to Pinterest 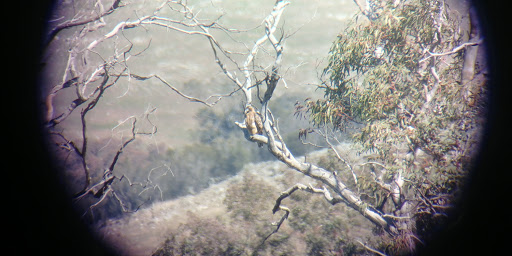 Real life eagle-watching is not like that portrayed on television. The birds are seldom seen in frame-filling format, rather they are specks in the sky or faintly discernable shapes sitting in trees. These views of Little Eagles in a tree next to their nest tree, give a true impression of the view of eagles through a telescope. Click on the images to see more detail. 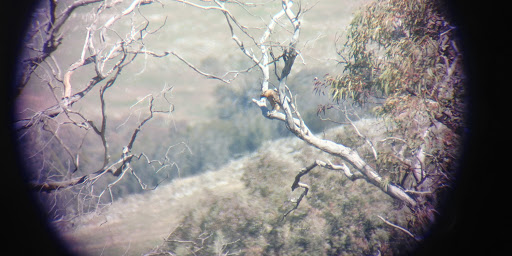 This female was quite difficult to spot when she was sitting upright. It was only when she moved, and leaned forward that she became just a little more obvious. 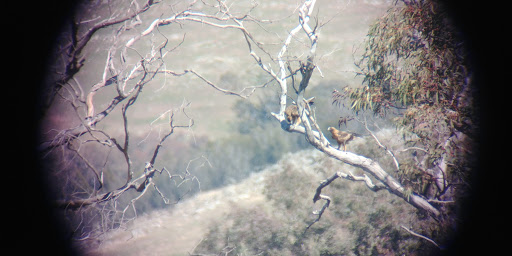 Movement is often the main betrayal of any bird's postion and when her partner flew onto the branch, the two of them called bringing more attention to their presence. 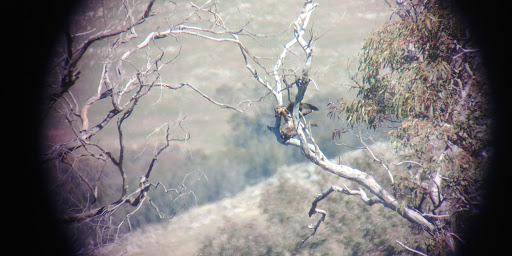 The Little Eagles in the ACT area are now settling to breed and mating is frequently seen. This pair's nest has been built up with fresh branches and leafy twigs, ready for eggs. And another pair already have an egg, laid on the 19th of August.

A new season on the way

Welcome home. The first Little Eagles have returned to their nests in the Australian Capital Territory and surrounding parts of New South Wales. Although it is still officially late winter there have been some bright sunny spring-type days and after some decent rainfall in autumn and winter the land is green, so different from the dry dust and smoke of last summer. 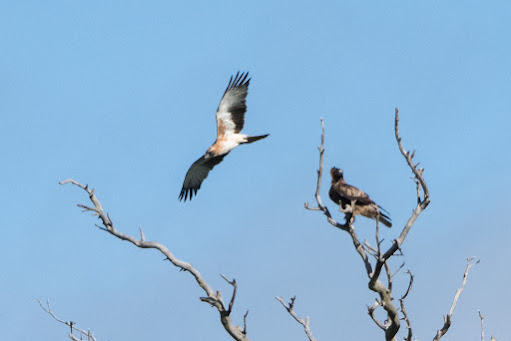 A pale morph male Little Eagle glides over his dark morph mate as she sits atop their nest tree. The tree is alive, only the top branches are dead. 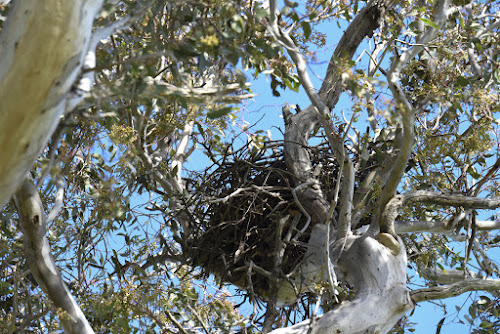 The nest which has new sticks added, is concealed in the foliage. 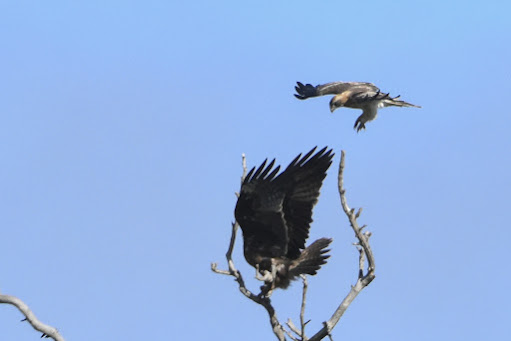 The pair were calling excitedly to one another,
the male diving past her as she lifted her wings. 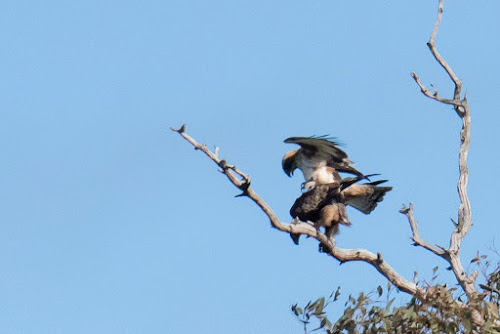 Then upon some signal between them, he jumped from the next branch and they copulated. Note how her tail is fully turned and tilted to one side, and his tail is firmly pressed over her cloaca. His talons are held forward and loosely closed as he balanced on his heels. 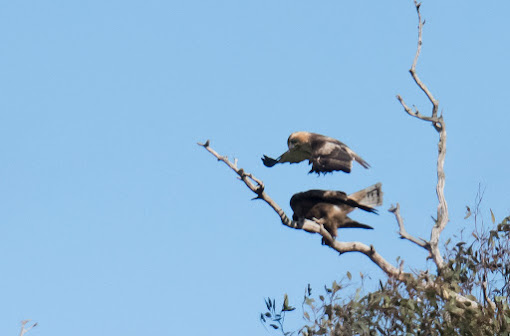 After a minute or so, he gently launched up off her back. 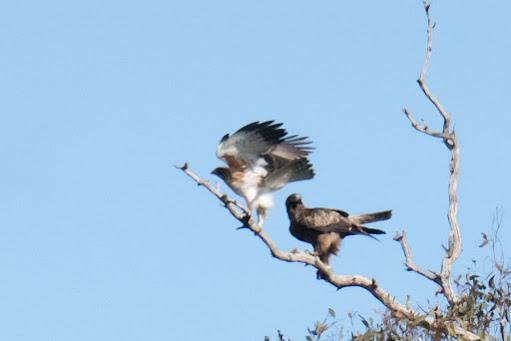 He landed next to her and both birds began preening and staightening their plumage. 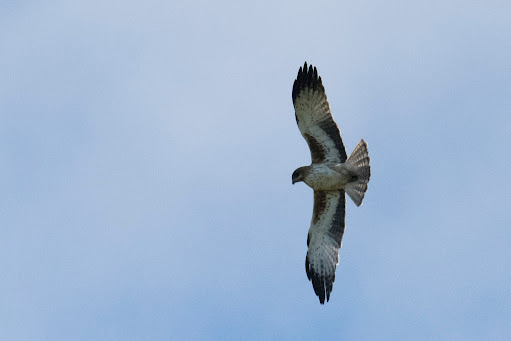 Several minutes later, the male took off and went away hunting, soaring low over the nearby treetops. 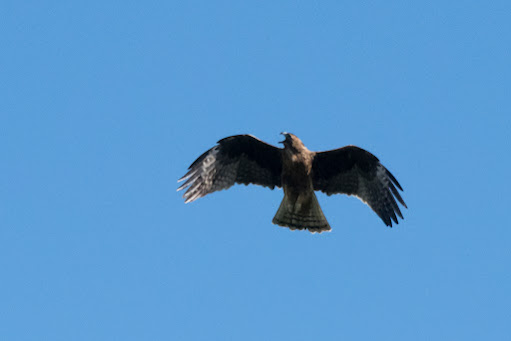 When the female took off about half an hour later later, she flew a different line, past her neighbours. And she quickly turned in alarm. 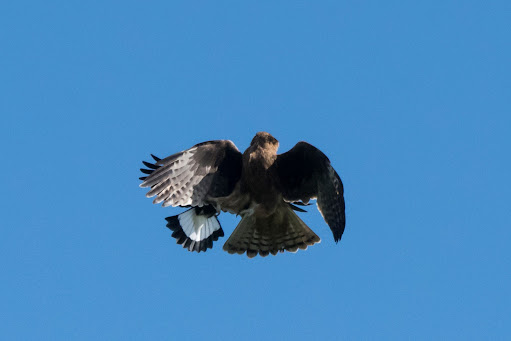 Her neighbours are Australian Magpies and one swooped very very close to her. The magpies have their nest three trees away and they will attack any animal they consider to be a threat to their nest, eggs or young, including humans. The eagle is more than capable of protecting herself, better than humans, and she casually drifted away to hunt over a nearby creek line. 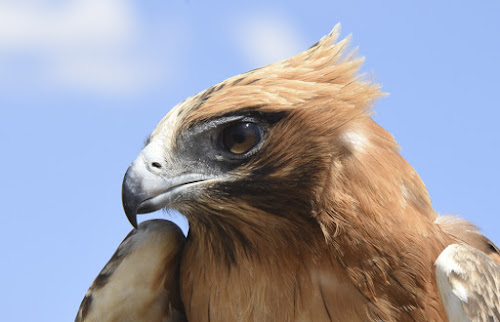 THE BREEDING SUCCESS AND DIET OF LITTLE EAGLES IN THE ACT AND NEARBY NSW IN A DRY YEAR, 2019

Abstract. Fourteen Little Eagle (Hieraaetus morphnoides) territories have been identified in the ACT in three years of study, although not all have been occupied in all years. In the ACT in 2019, spring rainfall was well below average and maximum temperatures above average. A minimum of ten pairs of Little Eagles were located in the ACT during the 2019–2020 breeding season. Nine pairs had nests and at least six laid eggs. A minimum of three pairs successfully fledged a chick each. Of four pairs that were monitored in nearby NSW, single chicks were successfully reared by three pairs and one nesting attempt was disrupted during incubation by a pair of Wedge-tailed Eagles (Aquila audax). Overall breeding success was lower than for 2018 but similar to 2017. The main prey types were: mammals (50%) of which rabbit was the main species; small/medium-sized birds (43%); and reptiles (7%). Similar proportions of mammals, birds and reptiles were eaten in 2019 and 2018, and a
higher proportion of mammals than in 2017.

This year's report shows that Little Eagle breeding success was lower in 2019 than in the previous two years, which were also low. It was dry in the study area in all three years, especially so in 2019, and potential prey species were likely low in abundance. Rabbit has been the most commonly taken prey item over the three years of study and it is likely that drought conditions have affected their numbers and those of the other main prey, small-medium sized birds. These results show how it is important to study such birds as raptors over several or more years as long-term data are more likely to reveal any causes for their breeding success than single or even three years' data.

The second annual report on the Little Eagle study - 2019 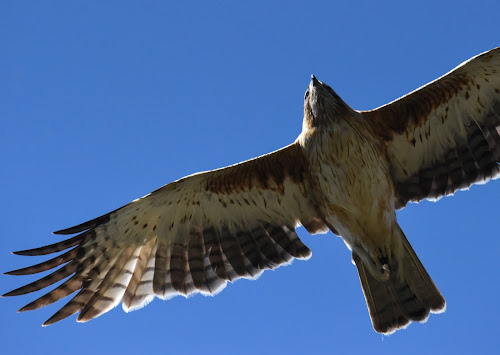 Abstract. There was a minimum of nine nesting pairs of Little Eagles (Hieraaetus morphnoides) in the ACT in the 2018/19 breeding season. Seven pairs laid eggs and five pairs successfully fledged a chick each. Two pairs were seen attending nests but were not known to have laid eggs. Four additional breeding pairs were monitored in nearby NSW; single chicks were successfully reared by three of these and one nesting attempt failed. The main prey type was rabbits (61%), then small/medium-sized birds (32%) and lizards (7%). More rabbits and fewer birds and reptiles were eaten in 2018–19 than in 2017–18. Samples of birds’ movements were followed with GPS-satellite transmitters. Adult males ranged mostly within 2-5 km of their nest sites and they left their breeding areas in early March. By April one had flown 2000 km to northern Queensland, one 450 km to Melbourne and another had ranged between 50 km west of the ACT and 100 km to the east. Juvenile eagles stayed mostly within 2 km of their nest sites before they left the area in early March. By April, one juvenile had dispersed 2000 km to Northern Queensland and another 450 km to south-east Victoria, via Yorke Peninsula in South Australia. A juvenile reared in the ACT in 2017 flew to south-east Queensland in its first winter, then to south-east Victoria via South Australia in the following spring and summer. 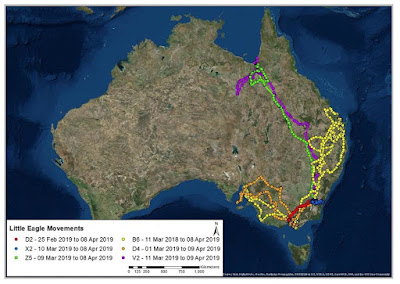 The highlight of this year's report was the distribution of the birds out of the breeding season. The above map shows how both young and adult birds dispersed widely across eastern Australia. Click on the link above to read the full report.

Publication of the results from a study of the movements of a Little Eagle out of the breeding season using data downloaded from a GPS satellite transmitter fitted to the bird. 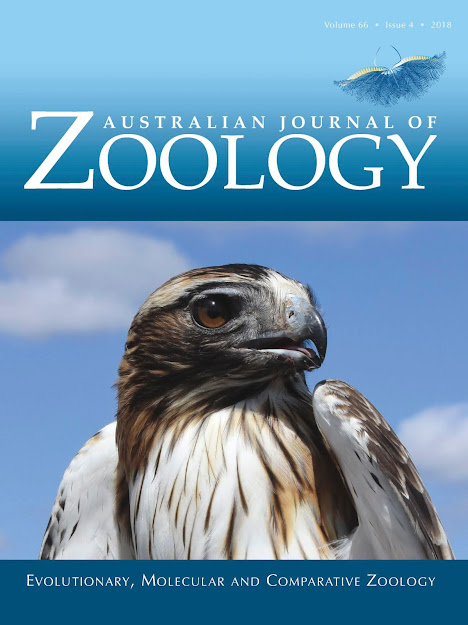 Abstract. The post-breeding migration of an adult male little eagle (Hieraaetus morphnoides) was followed from south-eastern Australia to the Northern Territory using a GPS satellite transmitter. The bird bred in open woodland habitat on the edge of the city of Canberra, Australian Capital Territory (ACT), before it ﬂew more than 3300 km in 18 days, to winter in an area of eucalypt savannah in the Northern Territory. It remained there for 59 days, within a range of ~30 km2 , after which the last signal was transmitted. The bird was subsequently resighted back in its ACT territory at the end of winter, thus completing a return migration. This is the ﬁrst conﬁrmation of post-breeding migration for the species. 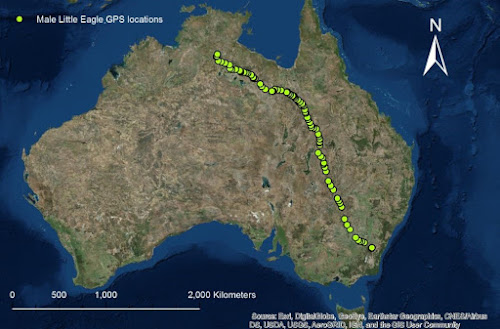 Map showing the north western movement of the male Little Eagle from Canberra in the Australian Capital Territory, to Kalala Station, near Daly Waters in the Northern Territory.

The study group have fitted GPS tags to 13 Little Eagles to date and continue to monitor their movements. Other birds have so far been recorded as far west as the York Peninsula in South Australia around eastern parts of New South Wales and Queensland, then north as far as the Cape York Peninsula.

Acknowledgment to J Olsen who helped by catching and tagging the first bird followed in this study. 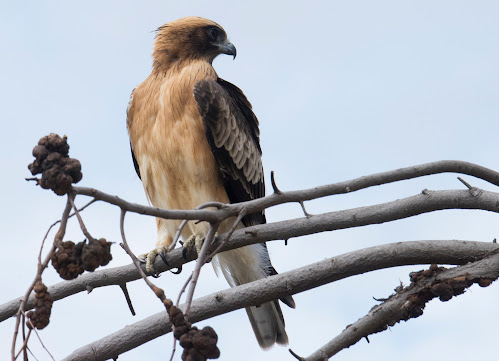 A young male Little Eagle, recently fledged in the ACT.

Abstract. This is a preliminary summary of findings from the first year of a long-term study of the Little Eagle (Hieraaetus morphnoides) in and near the ACT. There was a minimum of nine nesting pairs in the ACT in the 2017-2018 breeding season. Six pairs laid eggs and four chicks were reared; one from each of two nests and two from another. Three pairs were seen with nests but were not known to have laid eggs. Pairs were observed at two other locations and the public reported five further potential breeding locations in the ACT. Two additional nests were located in nearby NSW; a chick was reared in one nest and the other nesting attempt failed. Nests were regularly spaced, and found in woodland, partially cleared woodland or a windbreak. Nesting eagles did not appear to avoid or prefer to be near various urban features. The main prey type was small/medium-sized birds, although the most eaten individual species was Rabbit, and lizards were also taken.

This was a short report on the initial findings of the study, a baseline upon which to build the on-going project. As such, it determined an initial sample of Little Eagle pairs, territories and habitats to monitor in the study. Click on the link above to read the full report.

Welcome to this news page of the Little Eagle Research Group. Our aim is to study the number, breeding success and movements of the Little Eagle Hieraaetus morphnoides in the Australian Capital Territory (ACT) and nearby New South Wales (NSW). This is an informal, collaborative study group, drawing on the members’ knowledge of scientific research, fieldwork expertise and resources. Affiliated organisations are: Environment, Planning and Sustainable Development Directorate, ACT Government; CSIRO Land and Water; Ginninderry Joint Venture; and the Research School of Biology,The Australian National University. The study has been running since 2017.

We value interest in our study and if you have any information or sightings of Little Eagles you would like to share with the project, which will be held in confidence, please send them to:
little.eagle.research@gmail.com